This week involved a lot of the same geology. The monotony drove me to occasional boredom and left me with some disappointments. But the trip’s not about me, it’s about hardcore geolology (yes, that’s spelled correctly). So, we kept on keeping on to all the different areas if nothing else but to admire other people’s road warrior camper setups.

Jerry: an individual who exhibits a true lack of understanding for their sport, or for life in general. Also referred to as a “gaper.” (Check out @JerryOfTheDay on Instagram for examples)

Gneiss: altered granite (a metamorphic rock).
We rolled up to Capitol Reef, and I was trying to remember what I learned about it during field camp. Just like everything else in Utah, it was once under water before becoming a desert. So there are some clays and limestone, but most of what you can see are the sandstone from the desert period. In some areas there are deposits of gypsum. Gypsum is a soft rock formed by the evaporation of the sea that provides a great substitute for snowballs when you feel the need to pelt your friend in the back. You will also find some volcanic rocks that formed by magma just kinda feelin like it and showing up between the sandstone. You can find the volcanic layer by looking for the large black balls, around the size of your backpack or so, laying around. And if you go to Goosenecks Canyon, you can see “The Grand Canyon of Utah.” The rock layer at the bottom of Goosenecks just happens to be the same rock that’s at the very top of the Grand Canyon.

From there we made our way to Bears Ears National Monument via Glen Canyon National Recreation Area. Glen Canyon was incredibly beautiful, but Cat seems to have blocked it out of memory. It is a huge area with mesas, monoliths and canyons all in the same sandstone layers as everything else in Utah.

The Bears Ears hike was cool and so was the view. It is home to some Native American artifacts and dwellings, but as far as this post goes, it was just another sandstone mesa.

Right next to Bears Ears is Natural Bridges National Monument. In Natural Bridges you drive along canyons formed by tributaries of the Colorado River that cut into the sandstone and sometimes form natural bridges (aka arches). I’d say the arches at Arches are more interesting, but if you’re already at Bears Ears it’s only a couple miles away so you might as well. Also part of this area is Valley of the Gods which offers expansive views of sandstone cliffs, and yes still the same sandstone.

Then, we made it to Monument Valley or just a blatantly obvious remark on my opinion of the area: Monumental Disappointment. I have no idea where I acquired these alternate facts, but at one point I was informed that the monoliths at Monument Valley were the cores of ancient volcanos. I was super stoked about this and happy to see something other than red sandstone. However, when we showed up, I immediately knew that the “facts” as I knew them couldn’t be reinforced regardless how many times they were repeated in confidence. The red sandstone that formed them is impressive because they are quite large, but my intrigue had already been crushed and could care less about them at this point.

To follow up with disappointments, Cat and I went to Horseshoe Bend. It was located just two miles down the highway from our Walmart parking lot campground in Page, AZ. When we showed up, we couldn’t believe that it was only a 5-second hike with a mass of people already there. But for the geology, it is another impressive canyon cut by the Colorado though layers of sandstone. Once we got our Instagram photos, we quickly retreated through all the Jerrys back to the Walmart. 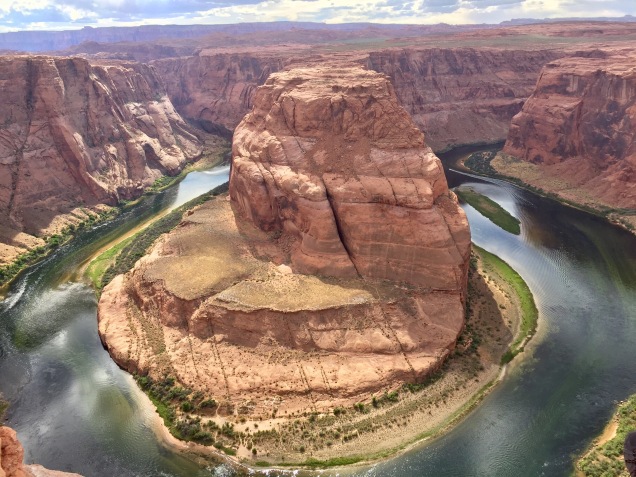 We left from Page to go rally our VW Golf through Grand Staircase-Escalante’s Cottonwood Road. Not sure if it was the high from rallying a car that shouldn’t be on dirt roads or the place itself, but the geology here was pretty rad. There’s a lot of hectic stuff going on here–lots of faults and lots of folds. For you guys, what that means is a lot of cool stuff to look at. (If you want to get more in-depth info on the geology of this drive I found a great guide: https://www.utahgeology.org/road_logs/uga-29_first_edition/NM_guide/gsenmlog.pdf)

The folds are what make a lot of the rock beds angle toward the sky. The faults do a good job of breaking up the layers and providing optimal locations for streams to cut canyons out of the rock. The rocks we have here are a lot of the same sandstone, but with some new ones thrown in giving you nice white, yellow and tan layers. In these layers, there are some more arches for you to find if you so desire, the most famous one being Grosvenors. There are also some thin coal beds in this region that you can see. Most importantly, the road you drive on is mainly formed on sediment that’s been deposited from the river making it a pretty rough drive (it adds to the fun). While this geologic expedition is doable with a VW Golf like we did, a car with more ground clearance would be highly recommended.

After popping out of the other side of Grand Staircase we headed over to Bryce Canyon. The many hoodoos have been carved out of river and lake deposits. This park has more hoodoos than any other place in the world. These are also the youngest rocks on the entire Grand Staircase region which includes The Grand Canyon and Zion (Czech out the geologic cross section so graciously provided by Wikipedia that shows this as referenced above).

After waking up to a surprisingly cold morning at Bryce, we headed on over to Zion. When you hike Angels Landing you can truly appreciate the power of water. From this vantage point, you can see the scale and amount of rock that has been eroded by the Virgin river to create this canyon. However, we still get the same rocks here as we have had so far. 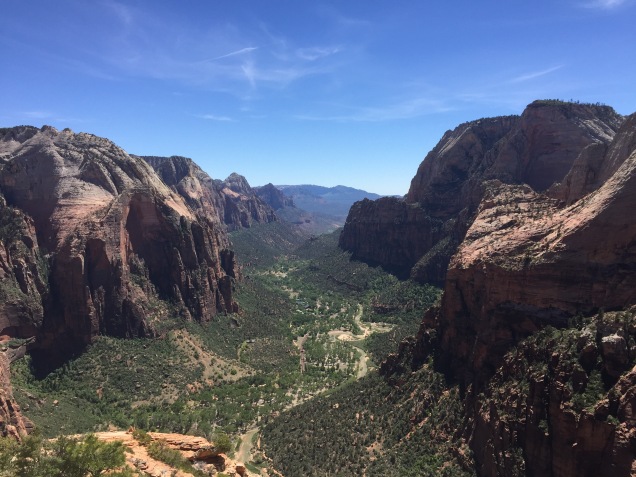 And for the final part of today’s lesson, we move onto the Grand Canyon. This is a massive canyon that has been cut by the Colorado River. It is a continuation of the rocks we’ve been seeing. As I said earlier, the top of the Grand Canyon is the same rock that is at the bottom of Goosenecks in Capitol Reef. What I hadn’t thought about before going here was the altitude. We were at the North Rim where the entire region had been uplifted to above 8,000 feet. This enabled snow to still be on the ground when we showed up, and is also what helped the Colorado cut so deeply into the rock layers. Now, we do get some more variation in the geology here. The canyon walls are a lot of sandstone, but there are more clay and limestone layers incorporated. When you get to the bottom of the canyon, you can find some granite and schist as seen in the picture of the strat column of the Grand​ Canyon. (You don’t get to touch the model, but I did, and it made me excited)

Now, I feel like this post was nowhere near as entertaining as my original post. There are a few reasons to blame for that: the first is setting the bar too high already which is my fault, and the second is the lack of diversity in the geology we were experiencing (but I’d rather blame it on the environment of this third-rate casino I’m writing this in while having lunch just up the road from the Hoover Dam). We may never know the true cause, but hopefully this conclusion makes up for it, and my next post won’t have to work as hard to improve over this one.