Surprise! Our legs found more ski slopes this week, but skiing wasn’t the only time we were on the snow. Our three-season tent had the honor of experiencing season four. Likewise, Evan has made some new jumps: he adopted a giant slug and smashed our windshield with his mighty fist.

Little did we know, when I posted last, that we’d be snow camping in Lassen Volcanic National Park. We rolled up to a nearly empty and closed park, but still had the fabulous opportunity of being assaulted by the delicious smell of the sulfur springs.

With two other tents set up, we threw down our tent on the snow which had been a result of a 200% more than average snowfall. That night, I couldn’t tell if Evan was hotboxing the tent with his farts or if it was the sulfur–I prefer to use Evan as my scapegoat.

Leaving Lassen Volcanic, we stopped in Weaverville for Mama Llama food. As an avid wannabe llama owner (I just recently found out therapy llamas might be a thing), I was stoked to eat at this place. It felt like a thrown-together townie lunch spot which only enhanced the NorCal hippie vibe and delicious food.
Evan and I stopped at Houda Point and Trinidad, California on our way to the Redwood National Park and happened to fall head over heels for the colder volcanic rock beach. Not equipped with a wetsuit (or surfboard), we merely froze our feet off as we ran into the water. Bonus, though, we got to make friends with starfish clinging to exposed rocks and embark on a tiny cave adventure. We walked around like kids in a candy shop. 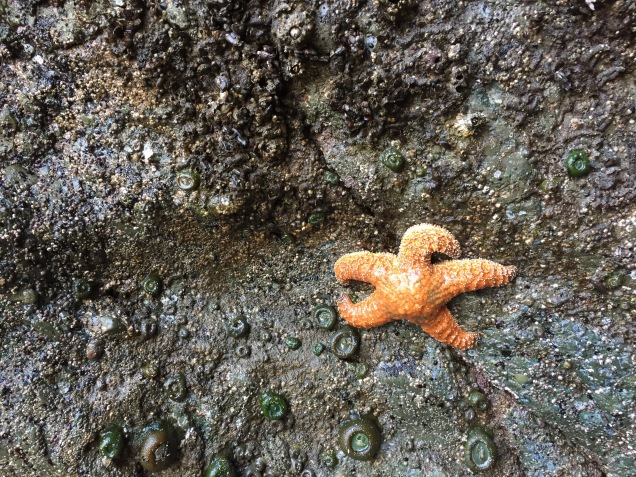 The best part was finding the seals on some rocks not too far off the beach. We were about to leave when we heard them barking. I immediately looked at Evan, yell “seals!” and start running toward the sound. Three seals were hanging out fighting about who was allowed to stay on the rock. It was quite the drama–nearly as juicy as watching The Bachelor.

Leaving my people (the seals) behind, we made it to Redwood National Park. It was beautiful with more of that cold coast, but was probably the most confusing national park we’ve visited. There are a couple national forests mixed around the national park and there’s not an ideal road to take straight through the park.

For some direction, we started talking to a ranger who happened to be putting on a stargazing even on in the park that night. So, we snagged a camp site for the night (where Evan adopted this massive slug) and arrived awkwardly early for the event on the Bald Hills. 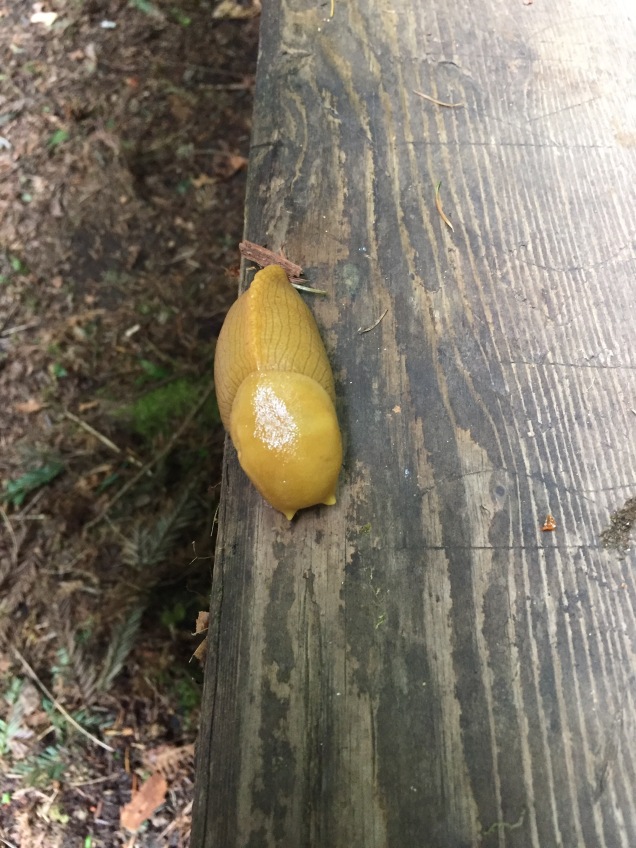 All of us plopped down in the field atop the mountain in hopes that the massive amounts of fog would lift and show us the constellations, but we ended up taking for three hours before giving up. To be honest, I felt like I was in a horror movie the entire time. The ranger kept mentioning she was worried about bears around, and she even told us that the rangers’ tracking of mountain lions showed that the cats enjoy sitting around trails and watching people pass. Now, we were in a field surrounded by thick woods and socked in by fog. I was on the edge of the circle which means I’d be the first to go. It’s always the one who’s easiest to pick off that gets claimed first. It was very tense and you could hear the frantic violins in the background as we looked for animals waiting to strike. Pretty sure everyone else was calm, but my mind obviously ran a bit wild. 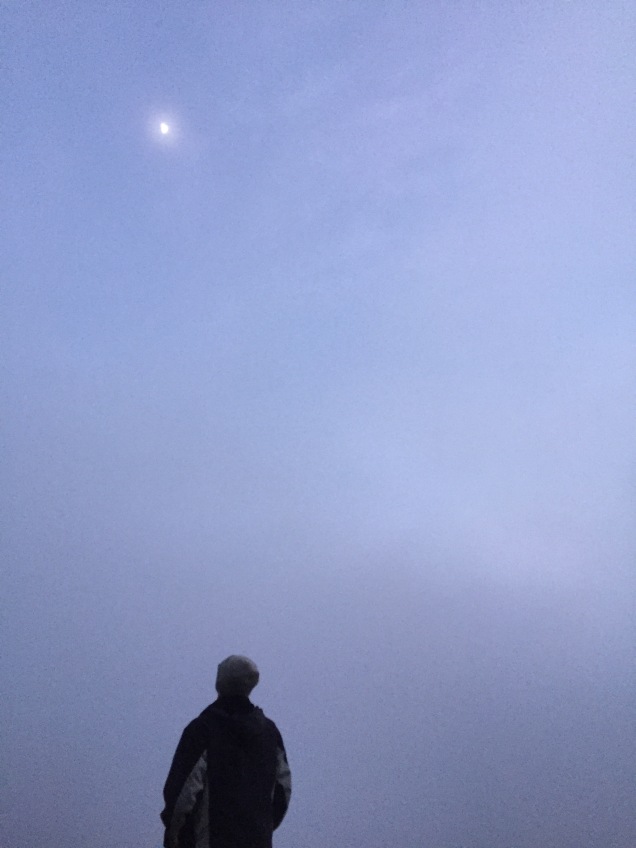 Today would initiate the downfall of our windshield, but our innocent selves began a beautiful day eating breakfast in Crescent Point. Evan was way too excited about having three different kinds of fresh seafood in his omelette. Clearly the day started out too well, and we were doomed. An incident had to occur.

We blissfully arrived at a snowy Crater Lake National Park on a fabulous bluebird day. We threw some snowballs and slid down a pre-made butt slide. My new Marmot shorts we even waterproof enough that I didn’t get ice burn or have a wet butt while walking around. (Too good, right?) Also, Evan got the chance to show Linda his sick sliding skills so she’d “break up with her boyfriend for sure” -Horgasm, a Love Story (it’s a ski movie that you won’t regret watching).

​
In the lodge, I asked a worker where we could catch the Penguins game and he directed me to Diamond Lake. Initially, i through the had sent us on a wild goose chase considering the lake was mostly a camping spot, but we found the bar and got to watch our team blow it (we lost 5-1). The downfall had to happen at some point.

From there, we quickly snagged a spot in the national forest. This time it was actually inside of the woods, but also in a nest of mosquitos. It was like having a school of fish following you, but ready to suck your blood. I went to the bathroom and got at least 20 bug bites in places I would rather not. The hatred for these pests slowly grew overnight. Evan was flicking them off our tent from the inside as he grumbled about the nerve they have for swarming us.
Day 22:

We looked at one another. “Ready?” I said. Evan nodded, and we flew out of the tent, shoved it inside the bag and flailed our arms as we booked it to the car. As I drove, Evan began killing all of the mosquitos that has decided to hitch a ride with us. With a war cry and incredible accuracy, he slapped down the final mosquito. As soon as his hand hit the windshield for the kill, his watch slapped the glass and it cracked. See carnage here: 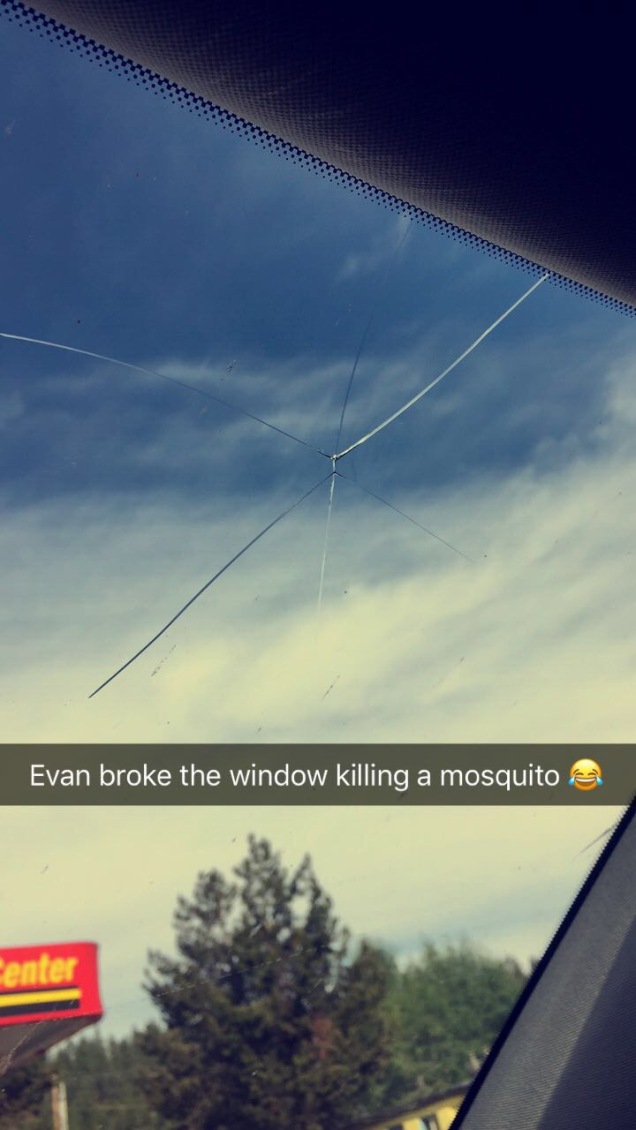 With our sad windshield in tow, we headed to Corvallis to stay with another of Evan’s friend. We arrived extremely early so we walked around town and wandered into an outdoors store, Peak. With greasy hair, smelly bodies and grungy third-day clothes, the guy working there mistook us for Corvallis locals. Hey, at least we didn’t have to feel bad about being disgusting for once. Our local-looking selves spent the evening hanging out at Sky High Brewing on their rooftop bar eating the best tater tots.

When we finally got to the friend’s place, his fiancé was talking about how, as a geologist, Evan’s friend continually makes them pull of the road to point out cool rock formations. I laughed because that’s exactly what Evan does, and he now shares it with all of you through his articles on here. Geologists, man. What are you gonna do.
Day 23:

Prying Evan away from a fellow geologist, we headed to test out our summer ski legs at Mount Hood Timberline. The snow was great and the runs were long. Our legs were feeling the burn, but so were our arms since shorts and t-shirts were the way to go. We did get to watch all of the mountaineers walking toward the top of Hood and gaze at the beauty of a crevasse while on the lifts. The mountain closed at 2 p.m., so we checked out the shop to snag a sticker for our dad. I also bought a shirt since I had absolutely no clean shirts left–wups.

We drove to Hood River to stay with our friends, talk about embarrassing stories and go out for some great pizza.
Day 24:

We spent the morning calling to see if auto glass repair shops could get us in as soon as possible. The only place that had a Golf windshield ready by tomorrow was in Portland, so we headed to the city with the warning from our friends that the people watching would be on another level (like watching-some-dude-swim-across-grass another level).

We didn’t really know where to go in the city, so we headed up to Rocky Butte to get almost a bird’s eyes view of the city and see Mount Saint Helen’s and Mount Hood from a distance. With the mental picture of an olympic grass swimmer, we hung out in a park in Vancouver, Washington before staying at our mom’s friend’s house nearby.

I put on my “nice” outfit, aka Chacos and slim-fit hiking pants, to go eat at an awesome restaurant on a dock. It was kind of relaxing to float and eat at the same time–we do tend to be power multitaskers. Unfortunately, we were not able to coax out any college stories about our mom as we previously had the chance to do in Huntington Beach.

For the first night since we started this trip, we got to sleep in beds like normal people. The cushy life left us refreshed and ready to take on the next leg of our trip. We’re off to Mount Saint Helen’s, Seattle, Olympic National Park, Mount Rainier National Park and Canada (for some Whistler skiing and Banff National Park).