This past week, I think we’ve been accepted into the bison community.  Stay tuned for updates on how we assimilate.
Day 36:

We left the comfy bed at Jackson and began our trek to the Badlands. Being that it’s more than a one day drive, we sat back, relaxed and popped in a movie. Mainly, it was me making weird faces at Evan. But we did pass a town called Emblem with only 10 people. We’re assuming FarmersOnly.com gets near 100% of that town’s business. Close to that “town” was Greybull where Evan and I set up camp for the night.

We popped into the center of Greybull for a breakfast spot. The first place we tried was some diner. I walked in and immediately all these older guys got quiet and looked at me with their cigarettes in hand, smoke pluming around them. I grimaced and slowly backed out of the door. That diner ain’t big enough for the both of us (queue John Wayne and his spinning boot spurs).

Moving on to a gentler looking diner, we met the owner who was nice, but frazzled. She told us she was an awful waitress, but that’s what we’d get for the morning because she had forgotten to schedule someone. She did tell us that Brett Keisel, a Steelers football player that I was unaware of because football is barely on my radar, is from Greybull. Our mom was stoked to hear us pass on that information to her, but will probably be disappointed when she sees that I had no idea who that man is. Sorry, Mom.

Driving again, we passed through Bighorn National Forest which had Evan extremely excited because they had signs explaining what rocks next to the road were from what era (ex. Cambrian). Another cool thing we happened upon was Devil’s Tower National Monument (the first ever national monument). Too bad we didn’t have our squirrel suits or else we could’ve taken a wee flight off of the top of the lump of basalt. After that, we did stop at Mount Rushmore and Crazy Horse, but they were lame and I even almost forgot to put them in this post.

We made it to the Sage Creek Campground in the Badlands before nightfall. Almost immediately, my eyes start itching and my nose starts running away from me. So, I took some Benadryl. I have never really taken it before and took the full two-pill dose. Within a half hour, I’m about to pass out so I flop into bed and tell Evan to wake me up when the stars come out.

“Cat! You can see the milky way!” Evan shouts to me from outside the tent.

I pull my head up and think I responded “cool, I’ll be right out,” but it apparently came across as “cshhhhhh eh mehphhhhhhhhhhh.” My eyes promptly shut and my head falls back onto the pillow.

Even with the drugged sleep, I did wake up to hear the pack of coyotes howling at various times throughout the night. I would’ve joined in if I wasn’t so zonked.
Day 38:

I think I woke up in heaven. Prairie dogs were popping out of their burrows to our left. (Side note: first time I typed prairie was on this trip, but I typed PRAIRIE DOGS. Now every time I try to calmly type prairie it autocorrects to PRAIRIE). We also happened to have a campsite visitor. Evan and I were watching him, and then decided to walk away. The huge guy started casually following us, so I was internally freaking out and attempted to slowly and calmly get into the car. You could tell everyone in the campsite was stoked to see the bison, but nervously walking around because they’re huge and could totally mess up your day.

​​
As we drove to breakfast, we saw two big bison get into a turf fight with their nostrils flaring, hooves stomping and nearly drooling with anger. I was hoping they settled deals with dance battles, but my hopes were crushed just a little bit. 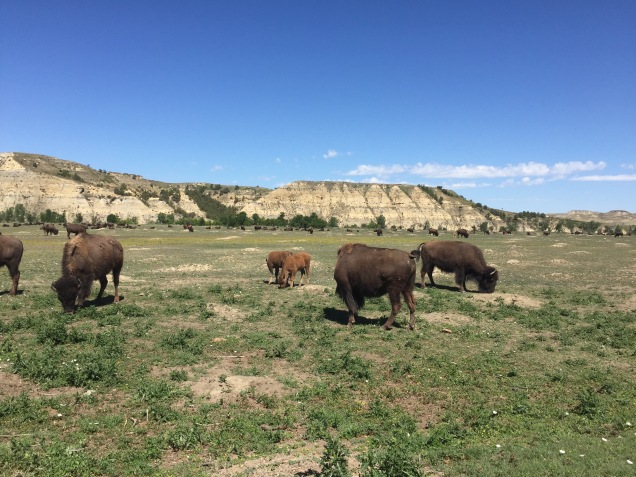 We got into the town of Wall and found out that apparently Wall Drug is a thing. It started out as a small general store in 1931. Now, it’s this massive place with nearly five places to eat, a gallery, different stores, places for pictures and a “backyard.” They gave you a map when you entered. It was probably the most overwhelming thing I’ve experienced, but they gave us a free sticker.

From there, we went to see the Minuteman Missile launch site on the park grounds. They had a ranger speaking who had actually been one of the people manning the launch site during the Cold War.

From multiple sources, we had heard that the Badlands is mostly a drive-through park. So, we passed through and found some big horned sheep before heading out to Theodore Roosevelt National Park to sleep. 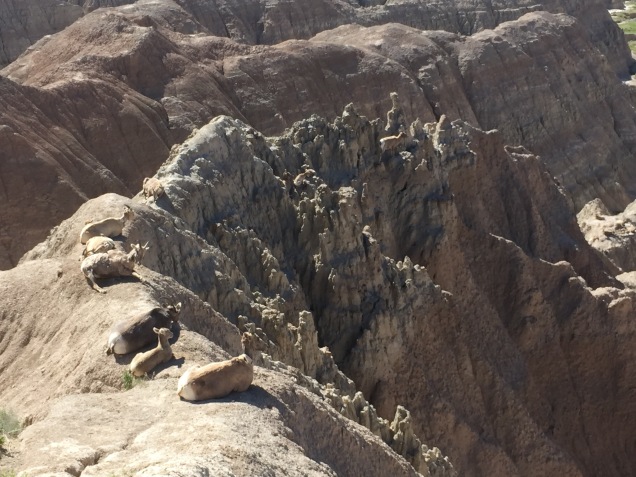 Teddy’s was very similar to the Badlands so we just took a short day hike by Jones Creek. It was mostly dodging bison and horse poo (there are wild horses in Teddy).

Again, there was a long drive ahead of us. We spent the night in a questionably sketchy park in Valley City.
Day 40:

We finished the drive to Voyageurs National Park that morning and stopped into the visitor’s center. The ranger was really nice while trying to help us find a hike to do. There was one that she said was her favorite, but she was incredibly hesitant to tell us about it. It would require “difficult navigation with rigorous hiking.” Evan and I were comfortable with that description, so we set out. 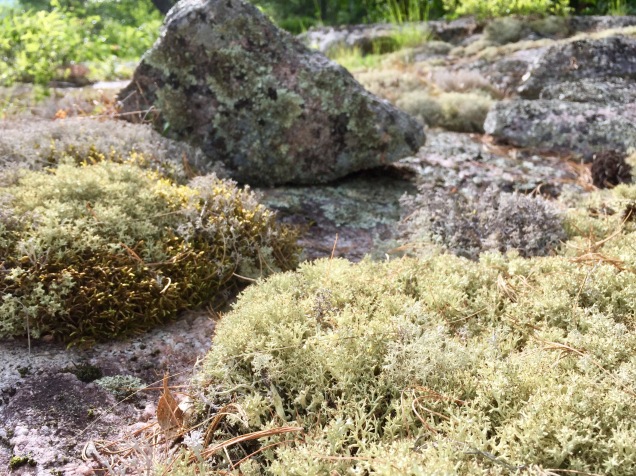 Before heading out, we almost entirely hosed ourselves down in deet and dressed in pants and long sleeves. Ticks were not about to get us. So, we set off on the easy trail with entirely minimal navigation skills used. We did, however, have ticks crawling all over ourselves. We de-ticked ourselves, stripped and hopped into the car.

Trying to find a campsite, we stopped at this restaurant to eat outside until more ticks started crawling on us. We grabbed our food and sat inside for the rest of the dinner. Then, we found a campsite from the waitress’ recommendation. Absolutely no one was there. I guess the ticks had thrown everyone out because apparently northern Minnesota is their town. Being paranoid about ticks and Lyme disease, we stayed in our car for the night and watched Louie C. K. standup until we fell asleep.
Day 41 and 42:

DRIVING driving driving. Butt-numbing amounts of uninterrupted driving. We popped back up into Canada and drove through Thunder Bay (hello, Staal brothers). We finished the evening at our campsite in Rainbow Falls Provincial Park just on the north side of Lake Superior.

As soon as we arrived, Evan said “I think I’m going to dip.”

We mentally prepped ourselves then took a mad dash into the cold water. It wasn’t as bad as we thought it would be, but it definitely wasn’t comfortable swimming water. The people next to us assumed we were from northern Canada because of our “polar plunge.” I guess, to them, we’re now just tough southerners.

The next day was pretty much driving through Wawa and staying in Sudbury for the evening.

Up next: finding Justin Trudeau, failing at blending in French Canada and more flubs.